Accounts Receivable: How to Address Clients Who Consistently Pay Late

Your company is doing well, bringing in new clients and getting lots of new orders or service calls. But even if business looks good on paper, one problem can prevent your company from thriving – a lack of cash. One study found that running out of money is the second leading cause of new business failure.

A company can run out of money for a few reasons. It might not be able to raise the funds it needs to take the next step, for example. Alternatively, it might struggle to get customers to pay on time, creating a significant lag between the time services or products are delivered and the time that the company receives payment.

Whether you’ve been in business for a while or you’re a new startup, there are multiple ways you can cope with clients who pay late. Knowing how to deal with late-paying customers can be the difference between your company growing and moving forward and having to shut its doors.

Before you can figure out how to get late-paying clients to pay on time, it helps to figure out who is paying late. One way to keep track of those who pay late is to make a note on their files when they make a late payment.

For example, if Customer A is 30 days late with an invoice payment, you can make a note such as “30 – 1” in the customer file. When the invoice is marked as paid, your accounts team can also mark it as 30 days late.

If Customer A makes another 30-day late payment, you can make the second note on the file, something along the lines of “30 – 2.” What matters is that the notations you use as part of the system are clear to you and anyone else who has to reference them.

Another way to identify late-paying clients is to create a list of late payers each quarter. Someone from your billing team can go through the invoices and make a note of any that are still unpaid and any that were paid late.

Waiting until the end of the quarter to review who’s been paying late — or who hasn’t been paying at all — can mean a considerable amount of work for your team. It can also mean you miss out on a fair amount of money over that time, as you won’t necessarily catch late payers or customers of concern early on.

Combining the two methods — notating each late payment and how many late payments a customer makes and making a master list each quarter — can offer you the best of both worlds. You’re able to identify customers who might be costing your company a lot and decide to stop working with them before it’s too costly. Additionally, seeing the big picture each quarter can help you determine whether or not late payment is a company-wide problem or limited to a few customers only.

Understand the Types of Late-Paying Customers

Along with knowing who is paying late, it can be helpful to understand the type of late-paying customers your business is working with. Realizing what might be behind a customer’s late or non-payment can help you understand their reasons for missing payments. It can also be a useful tool for preventing late payments in the future.

Here are a few common types of customers who pay late:

Come up With a Solution for Excuses

With the possible exception of the customer who never intended to pay your company in the first place, most late-paying clients have a reason or excuse for missing a payment due date. It’s up to you to have a response and solution to these excuses if you hope to get paid on time going forward.

Unfortunately, a customer who’s late on a payment isn’t likely to suddenly remember that he or she owes you and pay without prodding. Your business needs a plan in place for following up with those who miss payments.

The sooner you take action after a customer’s invoice becomes past due, the better. The longer you wait without getting paid, the more likely you are never to see payment.

Your follow-up plan should begin a few days after the due date and continue until you receive payment or you decide you are better off sending the issue to collections. Here’s a sample schedule to follow:

Once you get to the 30-day mark, continue to follow up with the client weekly. In some cases, the squeaky wheel does get the grease, or at least the money, so it can pay off to be persistent.

If 60 or 90 days go by and you haven’t heard from your client about payment or if the company keeps promising payment but doesn’t deliver, it might be time to take legal action. That can include sending a demand letter, taking the client to court or sending the account to collections.

When it comes to knowing how to write an email to collect payment, there can be a learning curve. To help keep your company’s message consistent and to reduce the time it takes you to pursue late-paying clients in the future, it can be helpful to create a template so you get the late-payment invoice wording just right.

When creating templates for a letter to your suppliers for late payment, try to keep the tone of the template friendly but firm. There’s no need to be rude, and rudeness will most likely result in your emails or letter getting deleted or discarded, rather than spurring the client to take action.

We would appreciate it if you would take a minute to pay the invoice. You can pay the account listed above or send a check to _______. We also accept (list other payment methods here).

Please let us know if you have any concerns or if we can help you in any way. For your reference, I’ve attached a copy of the invoice to this email.
Sincerely,

Make sure that anyone who would have any contact with a late-paying customer knows to use the template, as you want to maintain a consistent voice and tone across your business.

Accounts payable might be able to give you more information about where your payment is or why it’s late than your primary contact person can. It might also be that your payment is late because the person you’ve been in contact with never forwarded the invoice on to the right department.

Constantly having to follow up with customers who pay late or having to chase down clients for payments can eat into your time. You and your team probably have better things to do than send emails and letters or to spend all day on the phone trying to get paid.

Using automation software and services can save you a considerable amount of time. With an accounts receivable automation service, your clients receive reminders and notices on the dates you specify. The service can also handle escalating cases. For example, if a client is 60 days late, the service might put a hold on the customer’s account or send the invoice to collections.

One of the most important things to remember when following up with late-paying clients is that you need to stay professional. Whether you send the emails and notices yourself or use an automation service, the tone should be friendly and courteous. Never yell at or be rude to a client and avoid using threatening language in your written communications.

How to Prevent Customers From Paying Late

Often, doing what you can to keep customers from paying late is worth more than following up with customers after they’ve missed a due date.

There are a few things you can do throughout your relationship with a customer to make it as easy as possible for them to pay you.

Diversify Your Customer Base

While diversifying your customer base won’t necessarily keep your clients from paying late, it can mean that a late payment or two causes your company less harm or does less damage. For example, you have three clients, and one of those clients makes up 75 percent of all your income. If that one client misses a payment, you are out 75 percent of your income for that billing cycle.

Work With Clients Who Pay Late

It’s worth the effort to try to work with clients who pay late or who miss a payment, especially if those clients have been loyal customers in the past. One option is to contact the client and offer to set up a payment plan.

It could be that your client is dealing with accounts receivable troubles of its own and is having difficulty getting customers to pay up. Or it might be experiencing a slow period.

However, keep in mind that you’re running a business and that the relationships you have with clients or customers should stay professional. If a client is late once or twice, it’s fine to work with them.

But it can be in your best interests to re-evaluate the relationships you have with customers who often pay late or who need constant prodding to make a payment. Sometimes, you are better off cutting off connections with those who persistently pay late.

Want to learn more about automating your company’s processes? Request a demonstration of our services today.

Guide to Automating Your Business

Free your organization to do what it’s meant to do with automation!
DOWNLOAD NOW 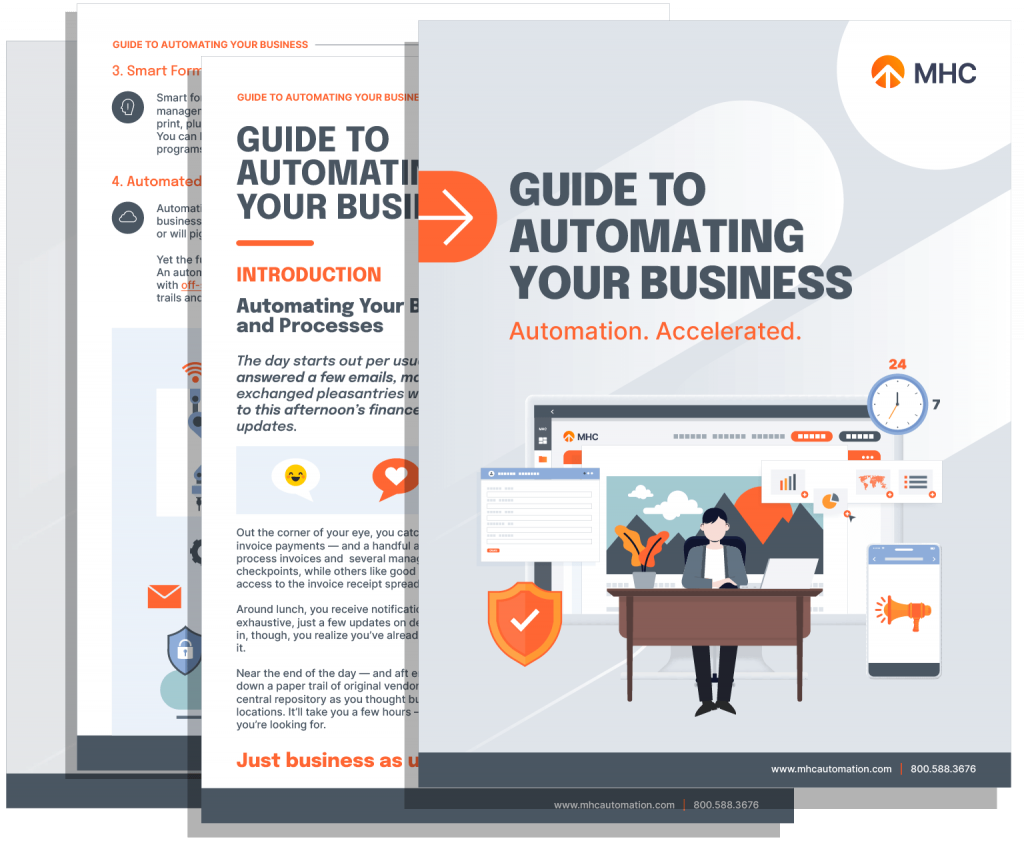